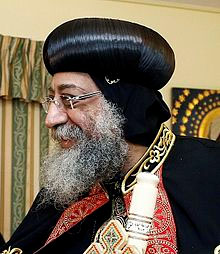 Today we celebrate the first anniversary of the enthronement our beloved father, His Holiness Pope Tawadros II.

We have experienced a year full of wisdom and renewal in our church. We, the CopticWorld Team, have experienced this first hand. We thank God for giving us this beautiful gift and wish His Holiness many more years to come, guiding His people.

The papal selection process began several weeks before the 4 November selection. About 2,400 clergymen and others shortlisted three candidates: Bishop Tawadros, former aide to Metropolitan Pachomios; Bishop Raphael; and Father Raphael Ava Mina, a monk in a monastery near Alexandria and disciple of 116th Pope Cyril VI.

The ceremony to choose the pope from the three consensus candidates was held at Cairo's St Mark's Cathedral at about noon and featured a marked police presence. 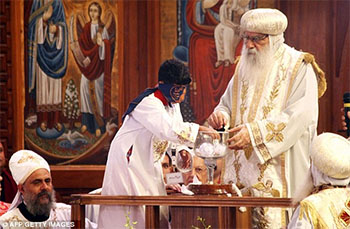 Prior to the selection, Metropolitan Pachomios, locum tenens of the Church, sealed the chalice with the names with red wax and put it upon the altar as he led the Divine Lituregy. He then told the congregation: "We will pray that God will choose the good shepherd." Following a moment of silence, a blindfolded boy then picked Tawadros's name from the chalice.

The thousands of congregants in attendance then erupted in ovation, tears or prayer. In reaction Tawadros II said, from the monastery at Wadi Natrun: "[We] will start by organising the house from within. It is a responsibility. Most important is...that the church, as an institution, serves the community." 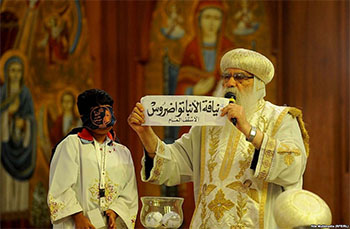 Pope Tawadros II started his papacy amid multiple changes in Egypt. He said that the Orthodox Church is committed to keeping Article 2 of Egypt's draft constitution intact, as it was in the old constitution and ended supporting the withdrawal of the Egyptian churches from Egypt's Constituent Assembly despite efforts by the presidency to convince them to return.

Bishop Raphael, who came first in the election stage of papal selection, was appointed general secretary of the Holy Synod of the Coptic Orthodox Church.