A Coptic American: Not Understanding the Struggle of Egyptian Minorities 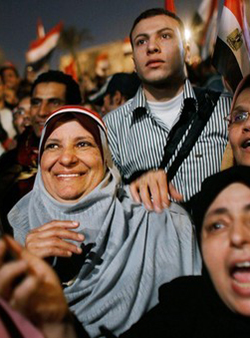 Like every other American, I wake up every morning with a common routine: the normal everyday struggles of getting my son ready for school, getting myself ready for work, paying bills, making food for our meals, and so on. I am lucky to have such a routine; a routine that many dream of.

I was fortunate that my father brought my family to this country when I was only 1 year old. This gave me the opportunity to learn what freedom means. Freedom is what the forefathers of this country drafted in our Constitution, allowing equality, the rights to expression, and the right to religious affiliation to all.

I was 13 years old when I visited Egypt in 1981. Coming off the plane, the first thing I heard was the loud speakers of Islamic prayer; from the North, South, East, West, all this sounds of praises from the loud speakers on the outside of the mosques. Being ignorant or naïve of the rights allowed to the majority of Muslims, I remarked loudly to my parents "what was that terrible sound?" I remember my mother looking at me and nudging me hard, telling me to shut up!!! Not realizing what I had done, I obeyed. When I got into my uncle's car, they explained to me why we had to be careful of what we do and say in public. "We are the discriminated minority."

Wow -- what a shock for me, coming from a country that allows basic human rights and freedom of expression. I realized that my mother's gold necklace bearing the Crucifix, which is always worn proudly around her neck, was tucked away in her blouse. I did not question much more. It was a culture shock for me. Was I coming on vacation to a country I should be afraid of being in or was I coming on vacation to have fun?

How naïve was I growing up ... not knowing anything about other cultures, I thought Egypt would allow the same freedoms as the USA. I was old enough to realize that there were problems between the minority Christians and the majority Muslims, but I was not old enough to understand the full extent of this issue. I began to understand that Christians had problems expressing themselves. In the year that I visited Egypt, conflicts between Muslims and Christians were especially bad.

As we were driving to my uncle's home, I looked outside the car window. Everyone looked the same to me. I could not tell who was Christian or Muslim, except for the women that were robed in the dark garments from head to toe, or those women who had scarves around their head covering the hair. Again, I asked why they were dressed like that? The only answer I received was that their religion stressed that women cover themselves, and that I should accept things and not ask too many questions.

I saw coffee shops on every corner in Egypt ... much like McDonald's is in the USA. The patrons consisted of predominantly men drinking tea or coffee, playing dominoes or backgammon, and smoking sheshas (what we know as hookahs).

As we drove, I also saw churches surrounded by gates. At the entrance of the gates were armed police officers and/or soldiers. Well, like any stranger, I was overcome with curiosity. I had to know details. I asked, insisting on receiving an answer, and I was told that many fanatical Muslims would attack the churches and the Christians. They would throw rocks at the Christians, they would threaten them, or even hit them with their bare hands as they were entering.

Wow, I thought. How strange!!! I have never gone to church and been afraid to enter. I realized that I was lucky for living in a country that ensures freedom of religion. I never knew what I took for granted. I was taught that the church is a safe haven, but how safe was it really? The Gospel tells us "Come to ME all who are heavy laden, and I will give you rest" (Matthew 11:28).

Where better to go to Christ for His rest other then His home, the Church? Where better to go and relax from the dangers of the world but in the comfort of His home? Yet, how hard was it to go to the House of the comforter? While writing this article, I looked up the verses:
... as a result you will be counted worthy of the kingdom of God, for which you are suffering. God is just: He will pay back trouble to those who trouble you and give relief to you who are troubled. This will happen when the Lord Jesus is revealed from heaven in blazing fire with his powerful angels. (2 Thessalonians 1:5-7 )
I grew up taking my Christianity for granted. I did not realize how difficult it was for our fellow Christians in Egypt to learn that believing in Christ was a danger to their health and wellbeing. How ironic it is to think that now I miss Sunday Service to watch the Chicago Bears football game! I live only a few minutes from church, and yet attending church feels like a duty instead of a privilege. However by seeing what the Christians in Egypt go through to attend church, I felt that I was a Christian by name only. How much they have to endure for praising the name of the Lord!

The more I think about this, the more I feel that I am not worthy of calling myself a Christian. Yet, I strive to be a Christian, especially after having my son, Andrew. I felt a calling to be motivated for his sake. Yes, I should be motivated for myself, but if he is my driving force, then I take this as a sign from God to get myself in gear.

Seeing the struggles of our fellow Christians in Egypt first hand, reading the latest news, and hearing about their needs motivated me to be involved with the actions taken here in the United States. It is for this reason that I have decided to be active in uniting the Chicago Coptic Christians and to motivate them for the sake of our Coptic Christians in Egypt. Our voices can, have, and will help them in their struggle. Christ has taught us to carry our cross and follow Him. Well, they are carrying their own cross by calling themselves Christians. We can help them achieve this freedom by speaking out. Our cross here is so much lighter then their cross. Therefore, I am dedicated in helping the Egyptian Christians bear their cross of the calling of Christianity. We here can help them bear it with love and peace. Please join me in this calling.

As a prisoner for the Lord, then, I urge you to live a life worthy of the calling you have received. Be completely humble and gentle; be patient, bearing with one another in love. Make every effort to keep the unity of the Spirit through the bond of peace. (Ephesians 4:1-3, italic stresses are mine)